When you set people up to fail, the pain lasts longer than you might think 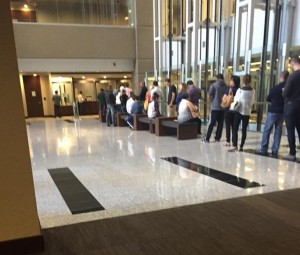 Last month I got pulled over by local law enforcement and was issued a $310 ticket and a summons to appear in court.  The ticket was legitimate; after all I was (unbeknownst to me) driving around town with an expired registration.  But the whole mess caused me to ask the question: Are you (inadvertently) taking actions that set people up to fail?  My premise was that the province of Alberta made a unilateral change in its procedures earlier this year without notifying those who were directly affected.  And that’s a sure-fire recipe for setting people up to fail!  The change: vehicle owners would no longer receive a reminder that their registration was expiring; it was now their responsibility to track expiry dates and renew accordingly.  And, you might ask, how were people to become aware of this change?  The assumption was that people would find out through announcements in traditional and social media.  Unfortunately, and to my bad luck, I was traveling out of the country during the “media blitz” and was blissfully unaware of the change … until of course I got pulled over by one of the boys in blue.

So on July 20th I made my way down to the local provincial courthouse to do as the ticket had commanded – present myself to a Justice of the Peace to make my case, and if I was not successful, to pay the fine.  Simple, right?  Wrong.  When I arrived, there were approximately 75 people in line ahead of me, many of whom were there for exactly the same violation.  Depending on which staff member was taking a break, there were anywhere from one to three counters open, and things were moving at a snail’s pace.  When I finally got to the front, it was only to discover that this was the preliminary line, I next was assigned to another waiting area … where about 25 people were waiting ahead of me.  One hour and 50 minutes later, I finally came face-to-face with the harried Justice who looked like she wished she hadn’t come to work that day.  It took me three minutes to make my case – that even though the charge was legitimate, it was in poor form to deliberately set people up to fail – and the Justice agreed.  She offered me two options – she could set a trial date when I could return and make my case in front of a judge, or she could reduce the penalty immediately by 50% to $155, and I could pay it and be on my way.  I don’t think it would take much to guess which one I picked!  Ten minutes later, with my wallet just a little bit lighter, I made my way out of the courthouse, lamenting the two hours of my life I would never get back.

So here’s my issue, which is not much different than the one I expressed last month on this blog.  Sure, this change in notification policy set up hundreds (maybe thousands) of people up to fail, which is bad enough, but then it went on to further create inefficiency and angst.  More people at the courthouse wasting time standing in line, harried staff at the counters and in the back office trying to keep up with the increased workload, and increased frustration to just about everyone involved in the process.  Now hang on a minute, I get that this is accompanied by increased revenue for the government (in the form of fines), but this still smacks of a major make-work project.  So I ask the question again – how many times have we, as leaders, set people up to fail which then causes further ineffectiveness and trouble in the organization?  Have you ever changed the rules halfway through the game, neglected to fully inform your staff, and then watched while employees had to spend time correcting errors.  Or changed your internal procedures for greater efficiency, forgotten to let your vendors and customers know, and then been astonished and dumbfounded because they were frustrated?  C’mon be honest – have you ever assigned a project to an employee, realized later that the emphasis in the assignment needed to shift, but not told your employee until s/he has already invested a significant amount of effort?  Or changed your return policies, altered the fine print in your contracts, only to then hear never-ending complaints from your front-line customer service reps who are facing the fall-out?

Are you, perhaps without even realizing it, setting your employees, vendors, customers and other stakeholders up to fail?  And creating inefficiency and frustration across the board?  Well, are you?  Please share your thoughts by commenting below.