Don’t just seek advice, pay attention to what you hear

Last year, I wrote a short series of posts on specific techniques you can use as a leader to improve the quality of your decision-making.  This story about a Swedish warship from the early 1600’s emphasizes not only the importance of approaching your team and experts to seek advice, but to also pay heed to the advice once you’ve heard it.

The tale of the Vasa: one king’s folly 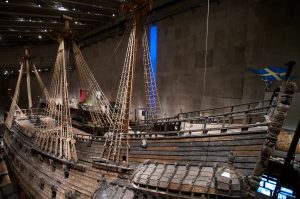 In 1626, King Gustavus Adolphus of Sweden ordered the building of the Vasa, a new warship that was intended to become, for that era, the most powerful marine vessel in the Baltic Sea.  As was common in warships then, the Vasa was to have a rank of cannons on each side of the boat so that soldiers could easily fire at their attackers, no matter what direction the assault came from.

King Adolphus considered himself something of an expert boat designer so he took an immense interest in the actual design of the ship.  About mid-way during the ship’s two year construction, he learned that Poland, his greatest archenemy (and rival to take control of the Baltic Sea), had stepped up their naval firepower by building warships with ranks of cannons on two levels.  Well, Adolphus wasn’t going to be outdone!  There was no way that the Poles could have more firepower than him!  So the king ordered that the Vasa should now also have cannons placed on two decks, lower and upper.

You can’t defy the laws of physics!

In vain did his advisors attempt to explain the flaw in the new design – specifically that the Vasa, given that it was already partially built, did not have enough ballast to support two heavy decks with cannons.  But the king was adamant.  So the construction continued and the number of cannons were doubled.

In 1628 the ship was finally finished and the shipbuilders conducted a safety test.  Thirty sailors were selected to run back and forth from side to side on the ship to ensure that it was stable.  The premise was that if the ship didn’t tip over and sink, then all was well.  Except that the ship starting tilting and rolling so much that the test was abandoned mid-way.  You’d think that this would be the end of the story.  Except that it wasn’t.

On August 10, 1628 the mighty Vasa took to the sea for her maiden (and what turned out to be her final) voyage.  She didn’t get much more than a couple of miles out of port before the wind picked up and sent the ship on her side; she started taking on water rapidly, and within a matter of hours, she sank.  The Vasa was lost.

If you seek advice, perhaps you should pay attention to what you hear …

The good King Adolphus was surrounded by a bevy of advisors, all there because at some point the king had determined that it was important to seek advice.  Yet when the time came, he chose to ignore what they had to say.  One school of thought is that if you believe in something strongly enough, you shouldn’t pay attention to the nay-sayers.  But there is an alternate point of view: if you’ve taken the trouble to surround yourself with people who are experts in their fields, then it’s worth stopping to consider what they have to say.  Certainly in this situation, history tells us that the latter approach would have been the wiser course of action.

So … which school of thought do you subscribe to?  Single-mindedly stick to your goals and see them through to the end, or listen to the experts who might tell you otherwise?  If you make the decision to seek advice, do you pay attention to what you hear?  I’d love to hear your perspective, please share it below.

P.S.  A subsequent royal investigation into the sinking of the Vasa determined that it was an “Act of God” (probably because no one in their right mind was going to blame the king!), which promptly closed the file.  The ship remained undersea until just the last century when, in 1961, she was raised and ultimately placed in the Vasa Museum in Stockholm.  Today, the museum hosts over one million visitors a year.